The Civic Museum of the Castle of San Giusto and the Armoury occupies the 14th and 15th century milieus of the Captain's House. Greeting the visitor on the ground floor is the the late-Gothic chapel of St. George. On the first floor of the museum there is the sumptuous Sala Caprin, which houses furnishings, sculptures and paintings - from Venetian territory and dating from the 16th to the 18th centuries and belonging to Giuseppe Caprin (Trieste 1843-1904), illustrious journalist, publisher and Triestine patriot. On the second floor is the covered 'chemin de ronde' or battlement walk holding the Armoury and featuring pole weapons (halberds, partisans, corseques, glaives), swords, daggers and bayonets, crossbows, springaldss, rifles and guns, tracing the evolution of armaments In Europe from the Middle Ages through to the 19th century.

The Castle of San Giusto stands on the hill overlooking Trieste, its gulf and its hinterland. The construction of the fortress, wanted by the Austrian emperors - whom the city had entrusted its protection in 1382 - to protect and control the city and to provide housing for the imperial captain, was carried out between 1468 and 1636. The building began with The Captain's House - a fortified residence alongside a "L" tower, later embedded in a triangular fortress attached to the three bastions: the Bastione Rotondo or Veneto from 1508-1509; The Lalio or Hoyos Bastion, polygonal in form from 1553-1557 and the triangular Bastione Fiorito or Pomis, completed in 1636.
Crossing the drawbridge, in the large vestibule are the statues of Michez and Jachez, the two large 19th-century time-keeping automats coming from the clock on the municipal building in Trieste in Piazza dell'Unità d'Italia, and the so-called Melon, a stone artifact, probably from the Roman era which has become one of the symbols of the city.
Within the Castle there are two important sections of the Civic Museums of History and Art: the Civic Museum of the Castle of San Giusto Armeria and the Tergestino Lapidarium at the Lalio Bastion. 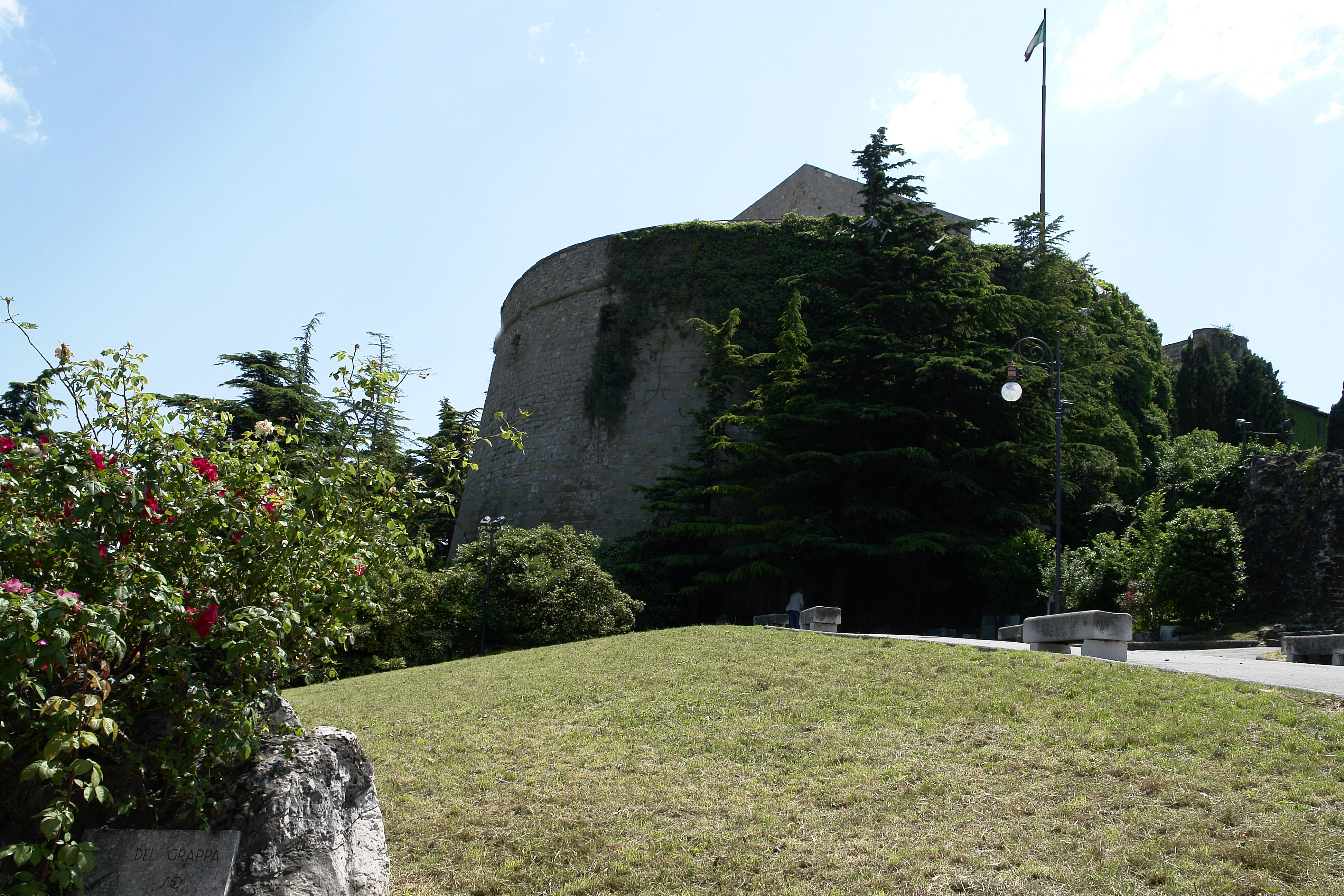 1. Mikez and Jakez, automaton timekeepers, 1875;
2. Coat of arms of Emperor Frederick III in the chapel of St. George, 1471;
3. Andrea Celesti, The Triumph of Venice, oil on canvas, late 17th century;
4. Powder-flask with the Myth of Perseus and Andromeda, Munich, mid-17th century;
5. The Trieste melon, in sandstone, Roman era